AMY LLOYD (she/ her) 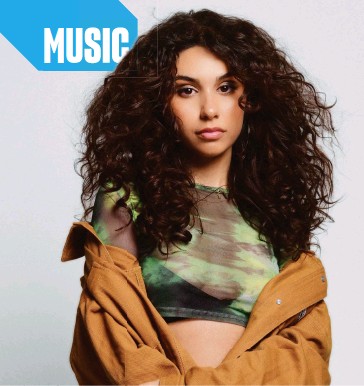 CHATTING WITH ALESSIA Cara, it’s easy to forget she’s a Platinum-selling, Grammy Award-winning artist. She’s so down to earth. The Brampton singer-songwriter skyrocketed to fame in 2015 with her debut album Know-It-All, has toured Europe and the U.S. as the opening act for Coldplay and recorded an original song for Disney’s Moana. Only 25 years old, Cara has achieved a lifetime of career goals and has grown up in front of millions. Her great new album In the Meantime is a classic blend of upbeat pop songs and emotional ballads, layered with Latin influences and impressive vibrato. Watch for Cara on holiday specials this month on CBS, NBC and Amazon Prime. 1. Meantime Meaning “I called it In the Meantime because of the ‘meantime’ we’re all experiencing — this life purgatory. It’s an encapsulation of my last year and what I’ve been up to, all the stories that have unfolded in the meantime. More symbolically, it represents the fact that we’re always in a state of transition, always growing and changing. Life itself is a meantime between birth and death, everything is impermanent.” 2. BFF Boy Troubles “I was writing in Montreal and my friend was with me in the studio. She was freaking out. The guy she was newly dating wasn’t responding to her texts. We started saying we would rather be alone than let a guy fool us. So I decided to write to this guy who was being shady and the song became Lie To Me. Turns out, he was just out to dinner with his cousin, so all is well! I got a great song out of it, so thank you, sir!” 3. Diverse Influences “Find My Boy feels like a contemporary spin on the traditional Portuguese music I grew up loving. Voice In My Head reminds me of The Police or Phil Collins and their melodic choices and the chorus feels almost reggae-inspired. Lie To Me has a cool, funky Destiny’s Child-esque throwback feel to it.” 4. Emotionally Vulnerability “I kind of hit a rock bottom emotionally and mentally last year and I had to look at my life in a different way. I needed to take better care of myself. It was a really sad, scary time. I’m sure we all have our own insecurities and voices in our head that warp our sense of self. Now that I’m on the other side of this feeling and okay, I think it’s a nice reminder that there’s always good days ahead.”