The actor sits down with Star Cineplex publisher Salah Bachir to discuss his funny and raw new autobiography, and the A-list encounters and speed bumps that helped shape him 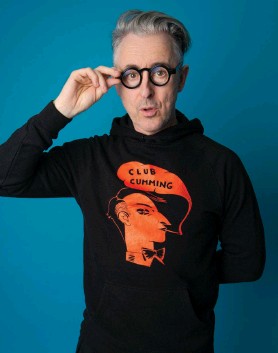 LAST MONTH, TONY- AND EMMY-AWARD-WINNING actor Alan Cumming published his latest book, Baggage: Tales From A Fully Packed Life, which details how he overcame childhood trauma and self-doubt to become one of the most highly acclaimed, versatile and inspiring actors of his time. This book follows Cumming’s highly praised memoir Not My Father’s Son, which was released seven years ago and focused on his abusive childhood, a startling departure for a man who loves to make us laugh. Salah: I want to start where everyone probably wants to start: with Cabaret. It’s like you were born to play the role of the Master of Ceremonies. Still, it must have been amazing to start out in Scotland, editing teen magazines and suddenly become the toast of Broadway. Alan: It was an incredible thing! It was so overwhelming. And it wasn’t until quite a few years later that I was able to put it into context because I had nothing at the time to compare it to. But I love when people talk about “iconic New Yorkers” and I’m one of them. It’s interesting. People come to New York are drawn to New York because they feel different. And when they get here they see everyone here is different, so they kind of belong. We belong in our difference. I’d lived in London for about 10 years and never really fit in, but in New York, I felt like everyone liked me and embraced the things for which I’d been somewhat derided, like my Scottishness and the way I sounded. I felt immediately at home and I still do, even though I’m thinking I want to become a kind of Scottish Greta Garbo and live up a hill by a loch. Salah: Do you feel like everybody’s grabbing at you and wanting things from you? Or do you just need an escape as you emerge from the pandemic? Alan: I think it’s that I really loved what I did during the pandemic. My husband [illustrator Grant Shaffer] and I were up in our place in the Catskills and I really loved the pace of that life. And I guess I just supposed it would gradually come back, my old life, and we’d be like country gents come to town instead of city slickers that come to the country. Actually, it’s all come back incredibly quickly at totally the peak of pre-pandemic craziness. I’m doing a concert tour, I’m doing a book tour, I start a movie and then I go to Spain to shoot another movie. And that’s all before Christmas! Salah: I saw recently that you want to do a remake of the 1969 film The Prime of Miss Jean Brodie in drag. Alan: Well, it’s not in drag. I want to make her a man. I just feel that character needs to be re-examined, because she’s a fascist. She’s in love with [Italian fascist leader Benito] Mussolini and teaches schoolkids about fascism and I feel like that aspect has been so sweetened. I read this new version of it that I thought was so brutal and amazing and I just thought it would be so great to play and become John Brody instead of Jean Brody. I think it’s interesting how sometimes you need to reboot something to remind people what it’s really about. Salah: Did you revisit a lot of your favourite films during the lockdown? Alan: One of my favourite films ever is Waiting for Guffman, a Christopher Guest mockumentary. It’s so hilariously clever and touching. I love all his films, but that one especially. It taught me a lot about America because I thought, if that’s being parodied, then it must exist. I guess I like slightly weird films and I love Fellini. I’ve got the Criterion Channel and I love just popping in there and thinking, gosh, I’ve never seen that Kurosawa or Bergman, and you can just go and watch it. Actually, there’s something I’m in that I just saw has gone into the Criterion Collection called Sweet Land, a film I made in Minnesota in 2005, so that’s exciting. But like everyone during the pandemic, I’ve watched a lot of TV. I’ve been obsessed with documentaries. And I do quite enjoy the consecutive thing of streaming.