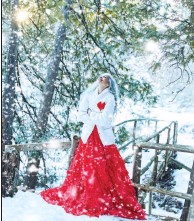 CANADIAN JAZZ singing sensation Molly Johnson is kicking off the holiday season with the release of a special fulllength holiday album, It’s A Snow Globe World. The album is made up of six newly recorded, soon-to-be holiday favourites, along with tracks from the singer-songwriter’s 2020 release, This Holiday Season. “It’s an unexpected holiday LP, filled with joy and happiness and sometimes a little blue as we all look to a brighter day,” said Johnson. Along with the upcoming album and the undeniably catchy new single, “Don’t You Know It’s Christmas,” Johnson has also announced that starting December 12, she will be heading out on a select city tour, with stops in London, Montreal, Ottawa, Quebec City and Toronto. It’s A Snow Globe World is Johnson’s eighth studio album and features a mix of ten original and holiday favorites. The special fulllength holiday album is available in stores and on all streaming platforms on October 29.