A CAVALCADE OF STARS ON JOHN’S LATEST ALBUM 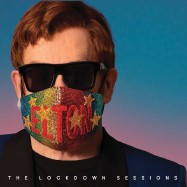 ON ELTON JOHN’S LATEST and 32nd album, The Lockdown Sessions, he commemorates the 30th anniversary of Metallica’s eponymous smash Black Album by teaming up with Grammy-winning producer Andrew Watt, Miley Cyrus, classical cellist Yo-Yo Ma, Red Hot Chili Peppers drummer Chad Smith and Metallica bassist Robert Trujillo for a cover of “Nothing Else Matters” in what became sort of a busman’s holiday. “On the Metallica track with Miley Cyrus, Andrew wanted me to start the song on piano and finish the song on piano,” John recalled. “On the Metallica track, originally it was just guitar, so it was another way of looking at things. If someone knows what they want and gives you directions, it’s fun.” And that’s how The Lockdown Sessions played out: songs sourced from various locations and circumstances, ranging from a live performance on the BRIT Awards of The Pet Shop Boys’ “It’s A Sin” with Years & Years as a duet, to another with fellow gay icon Lil Nas X on “One Of Me.” The album also contains a sweet posthumous duet with the late Glen Campbell on the last song the onetime Beach Boys guitarist wrote and recorded, “I’m Not Gonna Miss You.” Campbell’s family actually asked John to do the song for their own (yet-to-be announced) album. “I was so honoured, because it is such a beautiful lyric about the heartbreak of dementia and Alzheimer’s,” John said. “I’ve always been a Glen Campbell fan from way back when he was a guitarist with The Wrecking Crew – one of the greatest guitarists ever.” John also had a Zoom recording session with Texas soul pop duo Surfaces, contributing piano and vocals to the track “Learn To Fly.” He flew to London to lend the same talents to Damon Albarn’s Gorillaz and the song “The Pink Phantom,” and then duetted with Japanese singer and model Rina Sawayama on “Chosen Family.” The parade of stars didn’t stop there: Americana singer-songwriter Brandi Carlile, Motown legend Stevie Wonder (with his latest single, “Finish Line”), rock icon Stevie Nicks, Pearl Jam’s Eddie Vedder, rappers Young Thug and Nicki Minaj, country singer Jimmie Allen and deep house musician SG Lewis appear on the remaining tracks. There’s also the P’Nau remix of “Cold Heart” that has landed John his first Billboard Hot 100 hit in almost 20 years and his first U.K. No. 1 since 2005: a mash-up of the hits “Rocket Man,” “Sacrifice,” “Kiss the Bride” and a deeper Blue Moves album cut, “Where’s the Shoorah?” When he heard the P’Nau concoction, John realized he didn’t want to sing it solo, so he called up a new friend. “I thought, ‘I don’t want to sing the ‘Rocket Man’ bit; we’ve got to get someone else to sing that,’” he told the virtual press audience. “This year, we took Dua Lipa to dinner in Los Angeles. I’ve become friends with her, and my manager [Furnish] said, ‘Listen to the track and see if you like it and play it by the pool very loudly – and then give us a call.’ “And she did play it by the pool very loudly, and she called us and said, ‘I’m in, I want to do it.’”