SPIELBERG’S RE-ADAPTION OF West Side Story

The star- crossed lovers are headed back to the West Side 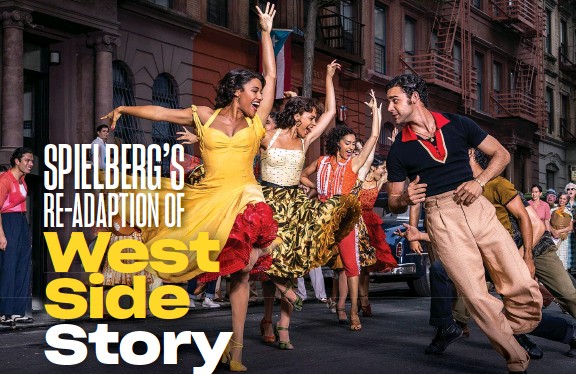 THE CLASSIC STORY OF FORBIDDEN LOVE AND THE hatred of rival gangs will return to the big screen when Steven Spielberg’s reimagined West Side Story hits theatres on December 10. The original West Side Story, a modern-day update of William Shakespeare’s Romeo and Juliet, debuted on Broadway in 1957 with music by Stephen Sondheim and Leonard Bernstein. A 1961 musical film adaptation, co-directed by Robert Wise and Jerome Robbins, starred Natalie Wood and Richard Beymer. It went on to win 10 Academy Awards in 1962, including Best Picture, Best Director, Best Supporting Actor and Actress, and Best Costume Design. It would be the biggest-grossing musical ever until The Sound of Music in 1965. Although a remake of the Oscar-winning film, Spielberg’s version is not a shot-for-shot copy of the musical. It has new scenes and updated dialogue, although it includes EGOT winner Rita Moreno, who won the Oscar for Best Supporting Actress for playing Anita in the original. In the new version, Moreno has a small role as Valentina, the owner of the corner store where hero Tony works. She also serves as an executive producer on the film. Because the original film is a classic, Moreno was hesitant about revisiting the ill-fated rivalry between the Jets and the Sharks, but she says Spielberg’s fresh take on the story changed her mind. “The breadth of Steven’s talent is enormous,” she raved to Variety. “I love the way they did ‘America,’” she gushed about the reimagined version of the scene that helped establish her stardom. “It’s completely different from the rooftop ‘America’ that we did and, believe me, that’s a terrific thing. Spielberg and [choreographer] Justin [Peck] decided they weren’t going to compete with something that’s so iconic.” As for the role that landed her an Oscar, Moreno is still pinching herself. “It’s the last thing I ever expected. That’s not something you say to yourself: ‘Oh, this is going to get me an Oscar.’ At least, I don’t think that way,” she said. “Possibly some actors may, but I certainly never thought in a million years that this little Puerto Rican girl was going to be nominated.” Spielberg’s reimagining of the groundbreaking film and Broadway musical centres actual Latino actors in the leading roles – newcomer Rachel Zegler plays Maria while Ansel Elgort portrays Tony – something the original film did not care to prioritize. With a script by Angels in America playwright Tony Kushner and choreography by the Tony-winning Justin Peck, the remake is stacked with talent. Ariana DeBose, David Alvarez, Mike Faist, Josh Andrés Rivera, Ana Isabelle, Corey Stoll and Brian d’Arcy James also star in the film. WEST SIDE STORY STARRING: RACHEL ZEGLER, ANSEL ELGORT, ARIANA DEBOSE AND DAVID ALVAREZ. DIRECTED BY: STEVEN SPIELBERG. RELEASE DATE: DECEMBER 10, 2021. RATED: PG-13.