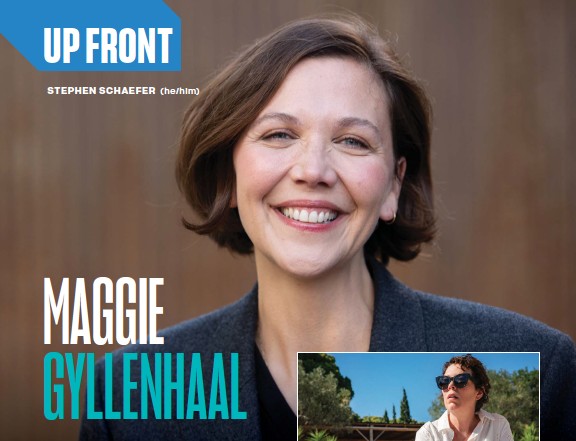 MAGGIE GYLLENHAAL HAS MADE AN acclaimed directing debut, adapting Elena Ferrante’s celebrated novel The Lost Daughter, but she had to play a director first to really own the job. “Someone asked me what I learned doing this film,” Gyllenhaal explained. “One of the things I learned was: I’ve always been a director! I just didn’t feel entitled to admit it to myself. So, weirdly, after playing a porn director on television in The Deuce, I went, ‘I think this is me. It’s a better job.’” Ferrante’s tale proved to be an irresistible subject, with its story of Leda (Oscar winner Olivia Colman) as an imperfect mother who reflects while on vacation in Greece about her life as a young mother and wife in Cambridge, MA, raising two daughters and frustrated in her marriage. “I thought, ‘This woman is so f**d up’ – and then a minute later I related to her. Am I f**d up? Or is this an experience that nobody is talking about? “These are secret truths about a feminine experience in the world I really liked, spoken out loud. What if instead of sitting in a room with this book, what would happen if you had to sit with strangers – or your mother or your husband – and have these secrets revealed? It seemed like a dangerous thing to try.” Also seemingly dangerous was casting Peter Sarsgaard, Gyllenhaal’s husband and father of their two children, as a randy professor who pursues the young Leda. “I worried, to be completely honest, maybe it’s not a great idea to have Peter play with an intelligent actress [Jessie Buckley]. Then something exploded in my mind. Peter and I have been together since I was 23 – that’s 20 years ago – and I know he loves me and I thought, there isn’t anyone who could play that part like him. So let’s go. Jessie, from the moment I had a Zoom call with her, I knew, that woman is a sister.” As for Sarsgaard’s bearded Lothario, “Peter surprised me at every moment and blew the lid off the character I wrote. It was everything I wanted it to be and beyond imagination.”